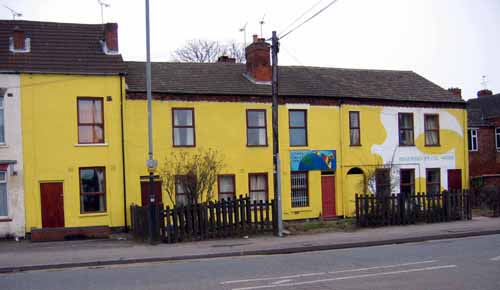 A focus for our support over the years, it includes two particular recent features:

Guest Room.
To ensure that visiting volunteers and peace workers have a proper place to stay Coventry Meeting undertook to furnish one room with beds and furniture and bedding.

The government had set an objective of quadrupling the use of cycles and this was part of the implementation of that vision. The centre consists of a workshop that refurbishes cycles, is available to members and organises group cycle rides. (It does not do cycle repairs but will show cycling centre members how). Currently it is looking for more volunteers to run it, who may or may not be members of the Peace House community. The Peace House is adjacent to the vehicle free cycle route along the Coventry Canal.

Worldwise Project
A project set up by Coventry Peace House Education Trust to deliver peace and development education, working in schools making pupils aware that we are all of one world and appreciating diversity of background and how we all have a lot to contribute.

History of the Peace House
From June 1997 until July 1998 there was a peace camp outside the Alvis tank factory on the Walsgrave Triangle in Coventry. Three people from the camp - Penny, John and Becqke then set up a fully mutual housing co-op so that they could establish a more permanent community based on non violence. They found six little houses in a row on the Stoney Stanton Road which had been empty for three and a half years and managed to buy them for £50,000 via a mortgage with Triodos bank and loanstock from lots of friends. They moved into Coventry Peace House in January 1999. The way a fully mutual housing co-op works is that the members are people who live there and basically they pay rent and the rent pays the mortgage. There is no private ownership but neither is there an outside body controlling it. While you live there you are like a steward of the property and when you leave, you just leave. It's a good way to live!

Over the years the property has been gradually renovated, so that now five of the houses are connected as one and the sixth is separate. The sixth house provides office space for two peace projects - Worldwise - which is a global citizenship project run by the Peace House and the other is a Peace Visionary project run by friends Heather Parker and Mark Hinton. The larger house gives co-op living space and also a cycling workshop and a community area for local people to use.

The renovation has been achieved through lots of help from volunteers - manually, inspirationally and financially, and through a project we ran for 4 years with young people. They were mainly young people who were disenchanted with school and either excluded or irregular attenders who came to us to learn some useful construction skills and also increase their confidence and self esteem. Many thanks to them all.

In January 2003 Coventry Peace House Education Trust was established, which is a registered charity which oversees all the peace and environmental projects. Coventry Cycling Centre opened in June 2004 and the Community Space in October 2005.

From the community:
"Since we moved in we have been active as a peace and environmental centre - for example by running free courses, offering hospitality to asylum seekers and campaigning. There are currently seven adults and one child living here, two people working here and lost of people passing through! It is a busy environment and not always peaceful in a tranquil kind of way, but it can be. We are lucky to have a large garden at the back which is great in the summer and a large kitchen with a wood burner which it toasty warm in the winter. Both of them are away from the traffic noise of Stoney Stanton Road and with a bit of imagination you can pretend you are in the countryside."
Their website:- www.covpeacehouse.org.uk